On Oct 30, 2012, two old customers from Sri Lanka came to our factory for training.

Mr Dias and Mr Jayasooriya were cousin brothers and they had separate jobs.

Jayasooriya is setting up a program for a broom

As the importer, Mr Dias was in charge of all the formalities of import & export, moreover, he worked as the translator between Mr Jayasooriya and us.

Being the manufacturer, Mr Jayasooriya was responsible for running a 3-axis brush tufting machine to make both brooms and toilet brushes, so he was the real trainee. 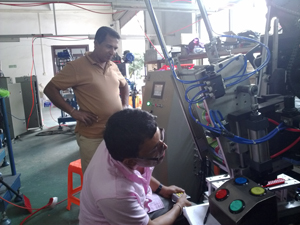 Cousin brothers are working together

With Technician Wu together

Mr Jayasooriya was quite hardworking, he took many pictures and videos to collect useful information as much as possible. Our technician said that such a hardworking student should be praised.   \(^o^)/